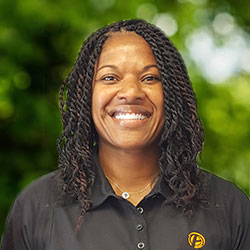 Kimberly has put her extensive yoga instruction certification and her outstanding sports performance record to work for Athletic Mentors in both its functional fitness and athlete camps.

She was awarded a 5-year full scholarship for Western Michigan University where she was a two-time Captain of the Western Michigan University Volleyball Team. She was a recipient of the Mid-American Conference Player of the Year and a member of the All-Decade Volleyball team. As a Middle Blocker for WMU, held several records from 1989-1992, and is still among the top 5 in Kills, Blocks, and assists in WMU Volleyball history.

With the US Olympic Volleyball National Team, she was a Silver Medalist.

Kimberly loves to spend time with her 12 year old son and her Chocolate Lab. Reading, gardening, and spending as much time as possible near or on open water makes her very happy.