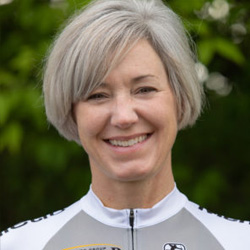 As a middle-distance runner by heart, Kathy grew up with a passion for running. She raced at 8 years old in the very first Borgess Run for the Health of it which led to running the 1 and 2 mile in high school. After a 15 year hiatus, Kathy returned to running in 2006. In search of new challenges, she delved into the world of Triathlon in 2007. Kathy soon found a love for the sport of Triathlon and the variety in training as a result. She became an Athletic Mentors’ coached athlete in 2015 and a team athlete later that same year. As she continued to learn and grow in the various disciplines, she soon found a love for the bike both in and outside of Triathlon. Kathy has achieved success off-road in both gravel and mountain bike racing.

Kathy holds a Bachelor of Science degree in Computer Science from Western Michigan University and has worked as an IT professional for over 25 years. As an application developer, database administrator, and project manager, Kathy’s organization and work ethic have aided in her successes throughout her tenure. As a wife and mother, she understands the challenges that come with balancing training and full-time careers both inside and outside of the home.

With 60+ triathlons under her belt, Kathy is now helping others on their journey in the realm of triathlon and the path towards a healthy lifestyle. As a USAT Certified triathlon coach, Kathy has helped Athletic Mentors organize and lead Tri Camps for both youth and adults. Whether you are aiming to compete in your first triathlon or looking to improve your performance, Athletic Mentors and their team of coaches have a plan for you.