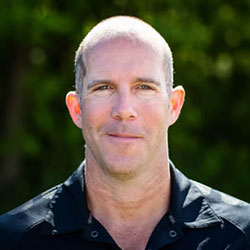 Mark Olson is one of the foremost experts in the fields of strength and conditioning, performance enhancement and general fitness in the State of Michigan. He currently spends his time coaching athletes from numerous sports at all levels, with a focus on elite hockey players from around the country. He serves as the head strength and conditioning coach of the Kalamazoo Wings pro hockey team, acts as a strength coach consultant of a variety of programs and trains rigorously himself.

Prior to founding Athletic Mentors, Mark served as the Head Strength and Conditioning Coach for Northern Michigan University after completing his own hockey career with NMU’s National Championship Team in 1991, where he was inducted into NMU’s sports hall of fame.
Following his hockey career, Mark went on to compete at very high levels in a variety of sports, including road and mountain bike racing, triathlon, XTERRA and powerlifting. Mark holds a Master’s degree in Applied Mathematics and has been an entrepreneur for numerous business ventures.

In 2003 Mark co-founded Athletic Mentors, which has become the premier strength and conditioning company in West Michigan. Athletic Mentors’ primary objective is to provide a coaching environment where athletes at all levels can reach their true potential in their disciplines and in their LIVES. Mark derives enormous pleasure from producing top-performing athletes, and has had the honor of helping many achieve their goals in state, national, and professional arenas. Athletes trained through Athletic Mentors programs range from youngsters to All Stars in almost every sport, plus non-athletes striving to be happy, healthy, moving and fit human beings.