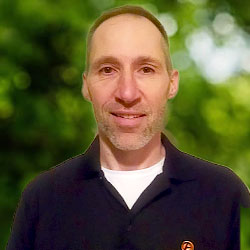 Terry Ritter has been a competitive cyclist since 1996. He has competed at the Elite level regionally in CX, MTB, Road and has participated for both National events and mountain bike Master‚ World Championships. Terry has extensive participation in multi-day road stage races, 12 and 24 Hour MTB endurance events, time trials and criteriums. He has also ridden unsupported across the country two times.

Managing Team Giant, Michigan for 7 years, Terry‚ helped develop riders from juniors through Cat. 1 on the road and cyclocross, as well as numerous MTB expert, semi-pro, and professional riders, both male and female. He has also coached triathletes of all distances and abilities, from local events to athletes he helped qualify for the Kona World Championships.

Terry graduated with a Masters in Human Nutrition from Michigan State and a Masters in Biomedical Engineering from Wayne State University. He has an extensive exercise physiology background and has worked with a number a of the top bike fitters in the country.

Terry is an Expert Level 2 USAC Cycling Coach with almost two decades of coaching experience. During this time he worked with juniors, Cat. 5‚ Cat. 1 cyclist, Masters men and women, touring cyclist and athletes of all ages. Has advised or coached a number of riders that now compete at the Pro Tour level. He acquired his Power Certification from USAC when it was introduced in 2005. Terry has also organized a number of training clinics, written for numerous publications, and been credited in cycling training manuals.

Terry has an easy going and fun demeanor and excels in explaining concepts to athletes. Has a strong understanding of the mental aspect of sports and is well rounded in all things impacting athletes and their life as it pertains to their events.